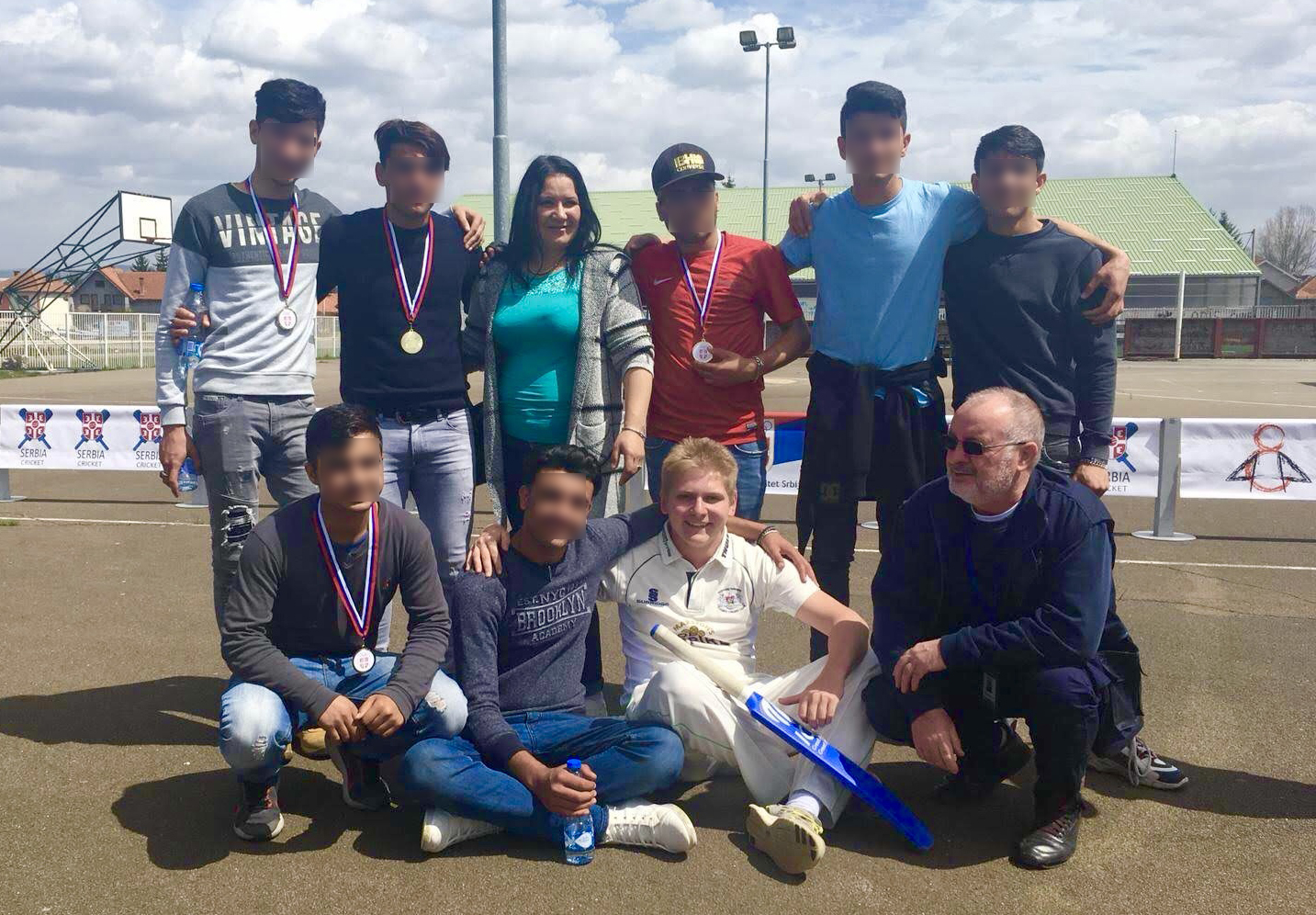 The job of the guardians of unaccompanied refugee and migrant children is to act in their best interest: to inform them of their rights, including the right to asylum, to assist them in exercising all their rights, to ensure the children’s participation in making decisions crucial to their future, to ensure the safety of their protegees and their health, to introduce the children to the new culture, to support their enrollment at schools, but also other organized activities such as language lessons and skills workshops… However, guardianship is so much more than a job. Guardianship is establishing trust and respect, the same kind that children have for their biological families or closest friends. On the feelings that drive them, their deep empathy, the desire to help children who find themselves in the most difficult circumstances, but also on their love for them – on everything caretaking entails, from another angle, here to discuss are guardians Ana Antanasijević and Mediha Lakota.

”I chose to become a guardian because I love children and I feel I act as both mother and father to my protegees while they’re staying in Serbia. I accept them as if they were my own children and it is a great privilege to have that sense of mutual respect and love. I’m a teacher by trade and my work with children is a life calling – not an obligation, but a pleasure”, explains the guardian Mediha Lakota, who works at the Centre for Social Work in Sjenica and who has served as guardian for over 1, 000 children there over the past three years.

Ana Antanasijević, who has been a professional guardian at the Centre for Social Work in Niš for over a year, is a padagogue by trade considers working with children “her path in life“.

”I’ve been working with this vulnerable social group since the start of the refugee crisis and I’ve dedicated myself to child protection. I love that I can help someone and I would like to retain the honor of that role”, says Ana and adds that she has had around 30 protegees at the Institute for Youth Education Niš.

That the guardians are humanity’s best ambassadors – shows in the warmth with which the guardians talk about their protegees, the kindness and empathy in their every word, and insisting that no man is a number, but an individual worth knowing.

”My protegees have stayed in Serbia longer and I’ve had the time to get to know them better, to see how their respond to particular situations… In the beginning, I was afraid I would forget some of those children, so I got a notebook and started writing down the stories which struck me the hardest, which I didn’t want to forget”, says Ana, who is currently serving as a guardian for four boys. She adds that when someone says “refugee“ or “migrant“, it is not just a concept for her anymore, but people and children with names and faces, who go to school, learn to read, play football, draw…

Ana considers getting to know individual cases to be the best way of fighting prejudice. She also admits that she herself has learned quite a bit from the children she has met and worked with.

”I know how difficult it is for them to leave their home, to pack everything in a single bag and set off. I’ve learned to admire that strength and fight for a better life. I’ve also learned to appreciate the little things and not to forget the past. I once spoke to a sixteen-year-old girl from Syria and I asked her which keepsake she brought from home. She replied – a pressed jasmine flower, as that’s the symbol of Damascus. Can you imagine a teenager on a perilous refugee journey, carrying a pressed flower in her bag?! I’ll always remember that”, the guardian Ana shares this touching story, adding that the children have not, nor will theiy ever forget where they’ve come from, but they are forced to seek out a better, safer life.

A testament to what life was like for most of the children who ventured to Europe by themselves are their life stories, which they shared with their greatest confidants – their guardians.

”Some children had their entire families slaughtered by the Taliban, while others were sent forth to save themselves and build a better future by their parents. One night, a Health Centre called me about a boy in a difficult mental state. As soon as I arrived, I found out that the boy received horrific photos from Afghanistan, photos of those killed in the bombings in which he recognized members of his family. I immadiately got him psychiatric assistance and, fortunately, his state improved”, Mediha Lakota mournfully recounts the story of her protegee.

Ana also confirms that children usually come from war-torn countries, fleeing persecution and poverty, and that they often have no contact with their family.

”We are, in fact, their first chance to really talk to someone since they’d left their homes, their first contact with someone who understands them, who will offer them a kind word and provide them with basic security. I think it means a lot to them, and they usually admit so themselves after the first meeting”, says Ana. She goes on to talk about a protegee who introduced her to his biological mother via video chat.

”I remember that scene, the worried old woman in that decrepid old house. Some children have parents living in poverty, while others have no living parents at all. Those orphans usually make it to Turkey, where they work unfit jobs for small factory wages. That’s how they collect money to continue the journey. The children who have guardians here usually don’t have parents, they’re often victims of war or poor health and lack of care”, explains Ana.

Both Mediha and Ana agree that refugee and migrant children are very modest, always showing gratitude for all the help and support they are getting. It’s from these children that the guardians have learned perhaps the most vital life lessons.

”These children possess a certain simplicity, they have something we professionally call resilience. They start their journeys with a deeply-rooted faith in a better life. Although they come from harsh, wartime conditions, they somehow find their strength within. They also possess an air of calm, despite the hardships they face. And they are incredibly modest”, explains the guardian Ana. She also adds that these children reminded her how important it is to have warm socks, comfortable shoes, but, most importantly, someone to stand by you when you need it the most, “a shoulder to cry on or at least someone to pass you the tissues“.

Although they came to Serbia with but a single bag, the children always find a way to express their love and respect for their guardians and others who offer them support and comfort.

”I will never forget the day the children made signed diplomas on Mother’s Day for me and their case officer. They drew Afghani and Serbian flags, bought a heart-shaped cake with our names on it: Mediha and Samira. They called us over and I cried when I saw all of it”, recalls Mediha. She adds that she would like to share another story, of a boy who, before departing for the Netherlands, left her a handkerchief his mother had given him as a lucky charm..

”He called me on the phone and told me his greatest wish was to leave that handkerchief to the person who’d been like a second mother to him in Serbia”, says Mediha.

The guardians joyously recall these gestures, the memories, drawings, decorative boxes, letters, messages and photos, which they keep at home and office, but more importantly – in their hearts.

”I served as guardian for a boy who had such grace. Whenever I asked him anything, he would say – well, it happens, no problem, we’ll take care of it, thank you. He wasn’t in denial, he simply believed everything would be fine. Before he left, he wrote a brief letter about life in Serbia, in which he said he only ever received kindness and humanity here. So, yes, you make a mark on someone’s life, and we barely managed to exchange a few words due to the linguistic differences”, says Ana.

The children often see their guardians as parents, best friends or teachers because of the intimacy they share.

”Most children call me “mum“ and it warms my heart. They come to the office daily to tell us what’s new, ask for what they need, share any health problems… And then we deal with it together. Just like a family. I act like a mother, I advise them to start attending school, to spend their free time making friends, learning languages, going to workshops instead of sleeping… I tell them everything I’d tell my own children”, says Mediha.

”They call me either teacher or by my name, but I think they see me as their best friend or older sister. I feel that connection every single day. Before they go to get food, they sometimes offer to get some for me, too”, says Ana, describing how the children also care for her.

The guardians emphasiye that the children usually don’t plan on staying in Serbia and that they want to make their way to the developped countries in Western Europe. Still, they stay in touch with their former guardians through social networks even when they leave Serbia.

”When they’re planning their departure, the boys always come to say farewell and they check in with me when they arrive in Belgrade or another country. Kids have called me from The Netherlands, France, Germany…”, says Mediha and admits that she sometimes finds farewells hhard, especially with children with which she had a longer-standing relationship.

Still, what matters most to Ana and Mediha is for the children to be happy, wherever they might be. They point out that the boys are highly adaptable and able to easily find their way around a new place.

”In my experience, they always manage to find their way, because the West has a community of people who got there before. They start learning the language, they enroll at school, they integrate, make friends. Despite the linguistic barrier, we often stay in touch via social networks. I’m satisfied knowing that their time in Serbia was good, that they had a safe and secure roof over their heads”, says Ana.

The guardians point out that the support they get from social work centres is crucial in their work. Mediha claims that being a guardian for 1, 000 children over three years would have been impossible without the support of the Director of the Centre for Social wok in Sjenica, Novak Dumić, but also the coordinator Nataša Pavićević, who, according to Mediha, “answers the phone in the middle of the night“. Ana also praises her cooperation with the coordinator Tijana Aleksić and the Centre for Social Work in Niš, and all the employees at the Institute for Youth Education in Niš.

The Ministry of Labor, Employment, Veteran and Social Affairs pays special attention to the most vulnerable individuals in the migrant population, such as unaccompanied and separated children. Over 20 social welfare institutions provide support and protection to all vulnerable groups and enable the protection of their personalities, health and human rights. Centers for social welfare (CSW), as guardianship authority, are bearing specific burden, issuing, only in 2020, 1500 guardianship decisions, 100 decisions on social institutional accommodation, and they were facing with over 16000 interventions working with migrant population.